A Christmas Day journey to Aralsk, Kazakhstan by Ben S.
CLICK HERE to see the complete set of photos accompanying this post

Much like prison, it is easier to arrive in Aralsk than to leave. This fact was starkly brought home to me while standing in line for three hours at the ticket counter inside the rail station, trying to get the ticket seller’s attention while veterans of the Great Patriotic War, Kazakh nationals, passengers’ relatives, other ex-Soviet citizens and indeed anyone who wasn’t a western tourist was waved to the front of the line. The only other western tourist in Aralsk at that time was my friend and travelling companion, unfortunately unable to join my vigil at the ‘kassa’ due to having to run off at intermittent periods to vomit in one of the station’s somewhat less-than-hygienic toilets. So at least she didn’t cut in front of me. Eventually, once the ticket seller had made certain that nobody else more worthy of a ticket was waiting in line, she deemed it safe to serve the foreigner and I managed to acquire the last two kupe tickets out of town and back to Shymkent. It was Christmas Day and the best present imaginable. 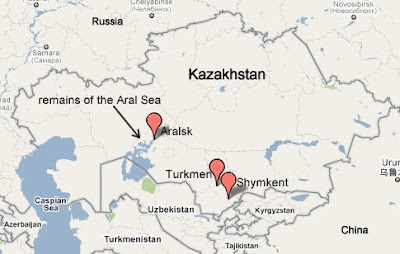 We had arrived in Aralsk earlier that morning following an all-night train journey from Turkestan as part of a rushed trip through Kazakhstan. Aralsk was once Kazakhstan’s main (only?) port on the shores of the fish-filled Aral Sea, and now it is the country’s main (only?) ex-port on the ex-shores of the ex-sea. Fans of desolation travel flock here to gaze in wonder at rusting memorabilia of the past. Hulking industrial detritus and eerie corpses of ships lying on the ex-seabed make great photos for those who love the decayed and dishevelled. A mural on the wall of the chilly station waiting room commemorates how the loyal Soviet citizens of Aralsk saved the Soviet Union by providing fish to feed the masses during the Great Patriotic War but now stands as testament to the stupidity and short-sightedness of agricultural experts and planners from that era. The poignancy of the situation is increased by the fact that, while you may ask for a ticket to (or if you’re lucky, from) Aralsk, the ticket will show that you are in fact travelling to ‘Aralskoe More’ (Aral Sea).


Do not expect a sea view from the rooms of the town’s only (and overpriced) hotel. In fact, don’t expect much apart from a lack of heating and possible pneumonia. It is however conveniently placed for the ship graveyard and so we dutifully tramped out to the former seabed in the snow, braving the bitter winds and -30 temperatures to get some obligatory photos, before returning to the hotel and desperately trying to keep warm. We also took time to admire the igloo-shaped swimming pool being built on the seabed for the benefit of the town’s population who are now dying due to the various ailments caused by the disappearance of the sea. 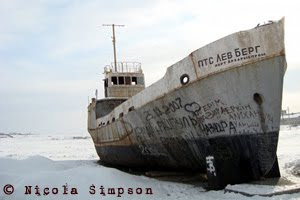 After a meal of manty at one of the town's two cafes, we returned to the station to begin the battle to purchase tickets out of town, having resolved to cut our visit short to avoid freezing to death in the unheated hotel. Lovers of old maps might be interested in seeing the huge wall-mounted one at the station showing every single railway station of the former Soviet Union. To see this however, you’ll need to attract the attention of the octogenarian station master. This can be accomplished by being foreign and being in Aralsk station at night. After being barked at and marched to his office, and once it has been ascertained that you are a foreigner, are travelling in Kazakhstan, have a passport and visa, you can try your luck by asking for permission to inspect the map more closely (although this will mark you out as a rather suspicious individual). Alternatively, non-trouble makers can spend their time relaxing at the station’s 24-hour snack bar (something, incidentally, that doesn’t exist at any public transport facility in nearby Kyrgyzstan). 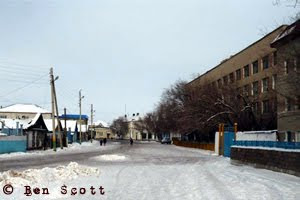 Being ‘stuck’ in Aralsk on Christmas Day is not the most traditionally ‘festive’ experience imaginable. The town is desolate, bitterly cold and lacking in conventional tourist attractions. As often occurs in Kazakhstan, exchanges with officialdom may be less than cosy. But even here, in this forlorn outpost of the Soviet Union overlooked by the oil-fuelled boom of ‘new’ Kazakhstan, there is still a warm glow of festive goodwill to be gained from encounters with residents. Like the pharmacy owner who saw that my companion will ill and opened up specially so that she could buy painkillers. Or, for that matter, the same gruff and suspicious station commander who joined us in the freezing midnight air on the platform as our train pulled in to sweep us back to civilisation. Despite our fears of further interrogation, it transpired he wanted to tell us exactly where to stand on the platform so we could be next to the train doors when they opened.

Aralsk is not Kazakhstan, but it is somewhere to be seen and experienced while travelling through that vast country. I can’t honestly say that I would recommend anyone travel a total of 28 hours just to spend a day in the town, and there are certainly more jolly (and warmer) places to spend the festive season, even in Central Asia. But, with a return ticket in hand, nobody could ever feel imprisoned under what must be one of the biggest, blackest and most star-spangled night skies you’ll ever be likely to see.

Just be sure to buy that return ticket before your departure!

CLICK HERE to see the complete set of photos accompanying this post.
Posted by annie at Tuesday, October 19, 2010