A Springtime Journey to Olkhon Island on Lake Baikal by Jane
CLICK HERE to see the complete set of photographs from this trip.

During the 2005-2006 school year, I taught at the American Home in Vladimir, Russia. At the beginning of May 2006, my friends Misha, Joanna, and Youngmee and I decided to put our ten-day spring vacation to good use by venturing into Siberia in order to explore Olkhon Island on Lake Baikal. 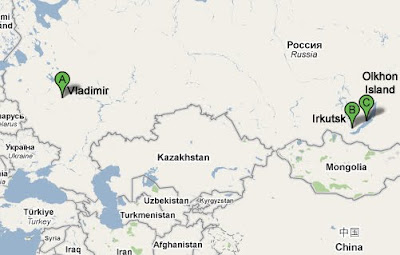 Baikal is the world’s deepest lake – over 1600 meters at its deepest – and it contains about 1/5 of the world’s fresh water, which is more than in all of America’s Great Lakes combined. The lake is an amazing habitat, home to large numbers of aquatic plants and animals found nowhere else in the world, including the delicious omul fish and the endangered nerpa seal. 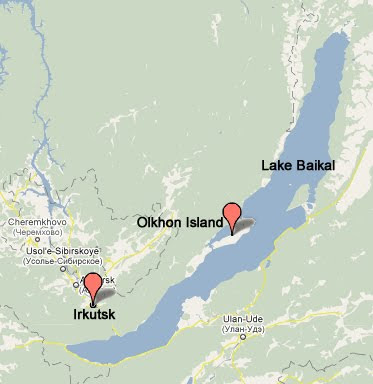 Olkhon is the largest island on the lake. Long and thin, it stretches roughly 72km end to end, while maxing out at around only 15km across. The island has long been a traditional home to Buryats, the indigenous people of the region, and although it was discovered by Russian explorers in the 17th century, it was only colonized by Russians during the Soviet era. Currently, the island is home to ethnic Buryats, Tatars, and Russians. Only about 1200 people reside there year-round, although as many as 300 people per day visit the island during the summer. 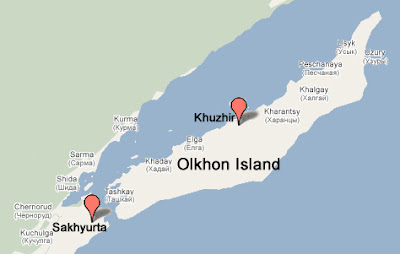 May in Siberia is definitely not “summer.” Late April to early May is, in fact, the most dangerous time of year to visit Olkhon. During the winter, Lake Baikal freezes to a great depth, allowing a heavily traveled “road” to open across the ice between the island’s main (and despite what GoogleMaps shows, essentially the only) village of Khuzhir, and the mainland. During the summer, a ferry frequently crosses the Olkhon Straits between the mainland village of Sakhyurta and the northeastern tip of the island.

During late spring, however, transport to and from Olkhon is rather dicey. As the weather warms and the ice weakens, travel by vehicle across the “road” is no longer possible. Most residents of Olkhon simply remain island-bound until the Olkhon Straits have thawed. During this time, only the desperate, the brave, and the foolhardy attempt passage.

My friends and I arrived, via rail, in Irkutsk on the morning of May 3rd, and immediately boarded a marshrutka (a mini-van taxi/bus common to the former Soviet Union) for the village of Sakhyurta on Baikal’s northwestern shore. To our surprise, we four were not the only foreigners in the marshrutka, as there was a Norwegian traveler named Ingvild on board. She, like us, was planning to brave the springtime crossing to Olkhon, and as such, we liked her immediately. Of the remaining travelers crammed into the marshrutka, only two others (two young Russian women) were bound for Olkhon; the rest were headed to various tiny villages along the way.

The marshrutka bolted out of Irkutsk and flew along winding, hilly roads at an absurd pace, with no regard for rules of the road. After four hours of our driver passing blind, uphill, and into oncoming traffic, we were sufficiently numb to the concept of personal safety to render a springtime crossing to Olkhon perfectly feasible.

Upon reaching Sakhyurta, the four of us, our new Norwegian companion, and the two Russian women (who were residents of Olkhon) were transferred from our standard marshrutka into the Marshrutka from Hell: an ancient converted ambulance with grimy windows, a front seat, and nothing but a dank, rusting cavern in the rear. The Russian women handily beat us to the front seat, leaving us to be bounced and jostled in the back for the 45-minute journey from Sakhyurta to the point where we intended to cross the ice. 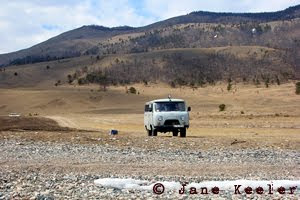 The Marshrutka from Hell


The Marshrutka from Hell stopped at the shore of the still-frozen lake, and the driver advised us that we would wait there for our transport. Transport! That implied a vehicle. However, upon exiting the van and wandering down to the lake itself, we discovered that the ice didn’t exactly appear all that solid. It creaked and groaned, and moved up and down when we walked on it. Ingvild looked at the ice and looked back at us. “I’m Norwegian, and I know ice. This ice isn’t stable.” The five of us looked into the distance, where we could see Olkhon rising up against the horizon approximately five kilometers away, but at that moment we felt as though we would never make it to our destination.

And then we spotted a dark speck in the distance, moving towards us across the ice. It grew in size and took shape: a red motorcycle with a side car. The motorcycle stopped about twenty feet from shore. The Russian women immediately began tramping across the ice towards it, while a man disembarked from the side car and headed our way. As the driver of the motorcycle loaded up the Russians and their possessions and headed off towards Olkhon, we became acquainted with its erstwhile passenger, Valeriy. Valeriy was the owner of Solnechnaya, our hostel on Olkhon. He assured us that he had cross the ice under similar conditions numerous times, and that it was not dangerous. He said we would start walking across the ice, and that the motorcycle would meet us along the way to ferry the rest of us across in shifts. 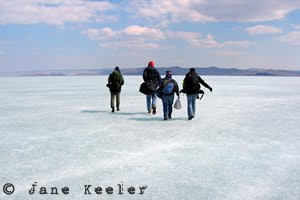 We shouldered our backpacks and set off across the ice. Walking on ice was difficult for all of us – save Valeriy. I, being a native Floridian, was continually slipping and sliding, terrified that if I fell I would go right through the ice. We were about a kilometer from shore when the motorcycle returned, and I gleefully hopped into the side car. At that point, anything that got my feet off the ice seemed an excellent idea. With the side car stuffed full of backpacks, and with Ina and Youngmee mounted behind the driver, we hung on for dear life as the motorcycle hurtled across the lake. The ride was bracing, thrilling, and more than a little frightening… but we made it, safe and alive, to the shore of Olkhon. One round trip of the motorcycle later, and Misha, Joanna, and Valeriy had joined us. 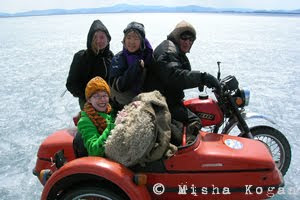 We were the first tourists of the season to arrive on the island, and it was wonderful to have the place all to ourselves. We settled into our cabin at Solnechnaya (a wonderful place, which I highly recommend, although it – like the rest of the island – has no running water, so prepare yourself for banyas and pit squatters), and set about enjoying our three days on the island. From striking natural rock formations and areas consecrated holy by Buryat shamans, to the dusty streets of Khuzhir and the decaying remains of former Soviet villages, Olkhon has tons to offer the desolation traveler. In this case, pictures most definitely speak louder than words, so CLICK HERE to peruse my entire set. 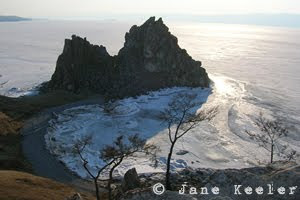 Burkhan (also called Shamanka)
This rock formation just outside of Khuzhir is a holy site of Buryat shamanism
During our last full day on the island, we decided to see if the island’s museum was open. We had been told by Valeriy that the museum was excellent for a museum covering life on an island with such a tiny population. The museum is named after one Mr. Revyakin, a teacher and founder of the museum, and it contains exhibits representing the traditional lifestyles of the Buryats and the original Russian settlers, as well as exhibits on the plant and animal life endemic to Baikal. But to be honest, the best part of the museum was its docent, a tiny, ancient woman, who was passionate about the museum and its contents, and who turned out to be the daughter of Mr. Revyakin himself! After hearing how and when the five of us had crossed the lake, she had us gather around an old motorcycle that was on display, and she told us the following story:

The motorcycle once belonged to Mr. Revyakin. One day in early May (!) Revyakin and a friend decided to cross the ice on his motorcycle, as the ice seemed thick and firm. The friend was carrying a large and heavy bag of fish, which was strapped to his back. They were in the process of crossing the lake when suddenly the ice broke, and the two men and the motorcycle fell through. Revyakin was able to climb free, and then he had to cut the bag of fish off of his friend’s back, in order to pull him out of the ice. The two men reached the shore in a state of hypothermia, lucky to be alive. Two years later, a fisherman “caught” the motorcycle in his net. Revyakin cleaned it up, put some gasoline in the tank, and it worked! The moral of the story was that under no circumstances were we to cross by motorcycle on our way back to the mainland. Luckily for us, she told us that the ice at the narrow Olkhon Straits would be melted enough for us to cross the following day by boat, which we did. 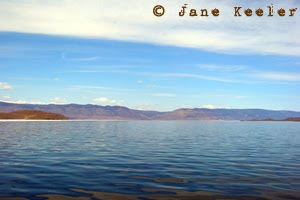 CLICK HERE to view the entire set of photographs from this trip.
Posted by annie at Thursday, October 21, 2010