Panmunjom: Crossing the line between North and South Korea

As I continue to feel bummed about the cancellation of DMZ tours (see yesterday's post), I've decided instead to revisit my trip to Panmunjom back in 2004.

Back in 2004, I was an employee of the US government, on assignment in South Korea. My co-workers and I were lucky enough to have a private tour arranged for us through our military liaison (normally, the only way civilians can visit the DMZ is via certain authorized tour groups). It was by far the most tense place in which I have ever stood, and while not exactly what one would consider a tourist attraction, it was definitely the most memorable part of my 2004 trip to Korea. 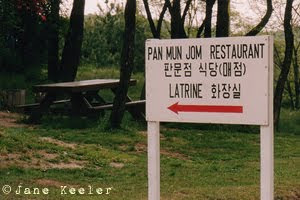 Our group arrived by bus into a desolate parking lot on a military base close to the border. Due to a scheduling error, our bus had arrived an hour early. The only sign of anything either non-military or non-parking lot was an unappetizing sign directing visitors to the Panmunjom Restaurant and Latrine. We decided to remain in the bus, waiting for our tour to begin. The eerie stillness of the place was only broken by the occasional explosion of artillery rounds in some sort of US/South Korean exercise being held nearby. Finally our official tour guide arrived, and we were driven to the border. The tour was very quiet, and everyone was very serious. You could feel the tension in the air, especially as armaments and security procedures were discussed.

When we arrived at Panmunjom, we were instructed to leave all possessions except cameras on our bus – we had to leave all purses, camera bags, backpacks, etc. on the bus. We were instructed not to make any sort of gestures towards the North Korean side of the border (ie, don't flip them the bird) or to shout or raise our voices. 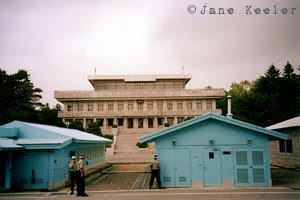 In Panmunjom itself, we were able to enter the blue buildings which straddle the actual border, where negotiations between North and South are held. We were even allowed to cross over onto the North Korean side while inside the building. (There were, however, no North Koreans present.) The southern side of Panmunjom is guarded by numerous South Korean troops who stand at a rigid attention. We could only see one North Korean soldier in the distance on the northern side of Panmunjom. Visitors are not allowed to cross the border in Panmunjom anywhere other than inside the negotiation building, and even then, it is under tight guard. 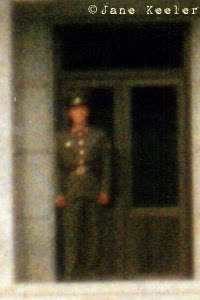 I had a pretty poor quality camera at the time - I zoomed in as far as I could, and then used my scanner (yep, this was pre-digital) to enlarge him as much as I could. Thus far, this is the only North Korean I've ever seen.

After viewing Panmunjom, we were driven to an overlook, where we were able to look across the actual DMZ into North Korea. It was disconcerting to realize that this peaceful looking stretch of land is in fact the most heavily armored border in the world. Given the rapid pace of development in South Korea, where there is hardly an empty tract of land that is not being developed, for this countryside to exist less than an hour north of bustling Seoul is rather unbelievable. 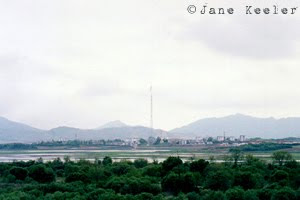 The only North Korean buildings we could see in the hazy distance belong to the small town of Kijong-dong, known south of the border as Propaganda Village. We were told that it was established as a "paradise village" to woo South Koreans to the paradise of the Communist North, yet it stands empty and is maintained as an empty shell for show. The tower in the center is the world's largest flagpole, with the world's largest flag. When a settlement on the South Korean side erected a slightly larger flagpole, the North Koreans enlarged theirs. There's definitely a bit of my-flag's-bigger-than-yours going on here.


To see the complete set of photographs from my trip to the DMZ back in 2004 - including a picture of me on the Northern side of the border in Panmunjom, CLICK HERE.
Posted by annie at Sunday, December 05, 2010