A bit of Yemeni desolation

Last month I noticed that my friend and Desolation Travel buddy Joe, who currently lives in Yemen, seemed to have vanished from that alternate reality known as Facebook. Now, I know that Joe has a habit of buggering off to places like Afghanistan and whatnot, so I wasn't particularly concerned (although I did make a few jokes along the lines of Joe having been kidnapped by AQAP). By late November, however, when I received a message from one of Joe's family members inquiring as to his whereabouts I started to wonder if perhaps indeed my jokes hadn't been too far off the mark. Not sure what AQAP would want with a big, hairy Canadian, but you never can tell with those guys.

But in the end, there was no cause for concern. It turns out that Joe had been vacationing on the remote and internetless island of Socotra off the Yemeni coast: 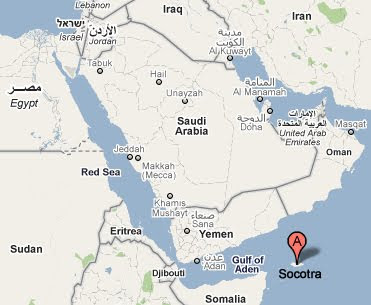 Since his return to mainland Yemen, Joe has worked to put up a six part detailed series on his experiences (including quite a few photographs), which can be viewed by clicking on the links below. Enjoy!
Socotra 101
The Socotran South
Wicked Western Socotra
Gettin' wet and dirty in east Socotra
The Heart of Socotra
Horrible Hadibo
Posted by annie at Thursday, December 09, 2010