From Osh to Murgab, by Joe
To view the complete set of photos, click here. 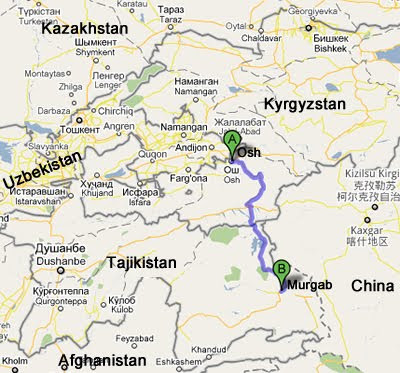 Sometimes it's not about travel itself, but instead about the epic fables you manufacture to impress your friends around the dinner table. Some 700 years ago, a young Italian by the name of Marco Polo (no relation to the t-shirt guy) set off to some of the most remote and uncharted lands of his time. His narrative of travels through China and Central Asia are nothing short of legendary, if not half fictitious. Not being one to simply take the words of others at face value, I opted for a little exploration of my own. However, this was not a journey about the destination, oh no. This was a glaring example of the old aphorism, “Getting there is 98.4% of the fun.”

When one arrives into the southern Kyrgyz city of Osh, you might think you've reached the end of the civilized world. Although an important town in the days of the Silk Road, it has fallen somewhat out of favour in last several hundred years. This is the new wild west. But the ubiquitous tumble weeds have been replaced by plastic bags. And instead of a shoot-out at high noon, you are more likely to see a dispute settled by some pissed off motorist chasing a guy down in an antiquated Lada death-trap (actually saw this happen). Sadly, not even a place like this is backwater enough for some. I did not come for Osh. I was here to blindly leap from this “end of civilization” into the unknown desolation abyss.

Osh is typically where travellers come to find transport to the Pamir Highway, the eastern 2/3 of Tajikistan made famous by that young Italian explorer. This was the frontier of the Soviet Union, the bounds of all things refined in a largely unrefined empire. Whereas most holidayers will base their travel decisions on such non-sensical ideals as logic and rationality, these are not for me. Instead, I was travelling to the region at the very end of the short lived tourist season. While the summer months can be lovely along the mostly 4,000+ meter high roadway, winter here is harsh. We're talking 1,000s die due to the extreme cold. Matters aren't helped much by the apathetic central government that provides a mere 3 hours of state electricity a day. And remember, there are no trees for burning at these altitudes.

With no public transport system along the highway, travellers are forced to arrange shared taxis. These go for around $200+, one-way, for the trip from Osh to the Tajik “town” of Murgab. But let me remind you that my rather harebrained travel itinerary had me heading to the region when there were no others with whom to share costs. And with this single trip costing half of my monthly Kyrgyz salary, I was forced to seek out an alternative. Rumours were that I might find something around the bus terminal. When you're desperate, any sign of hope will do. That's when I met Sergei.

Sergei was doing a supply run in a couple hours from Osh to Murgab in his old Soviet Raf van. Loaded with tomatoes, roofing shingles, ghettoblasters, and a variety of “mystery” packages, there wasn't a lot of room for a passenger. But at an agreed price of $20, I was quite happy to forsake a little leg room. I scurried around town, collecting my things and making last minute purchases of road trip grub as I wasn't fully convinced Sergei would let me chow down on his precious commodities. As the time came to leave, I wasn't sure my anachronistic chariot would even make it out of the parking lot. Even so, I carved out a makeshift seat for the 10-12 hour journey. 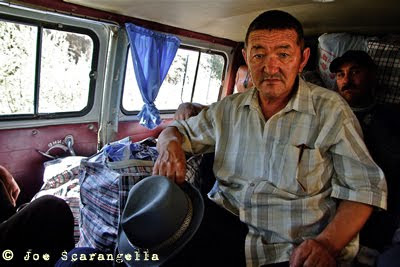 My fellow passengers
I couldn't figure out if my pilot was lost, but we circled Osh a fair few times. It soon became clear; the van wasn't fully loaded yet. In the nearly 2 hours of make-shift city tour, we managed to pick up more surprise gift bags and even a couple other passengers. We became very closely acquainted, very quickly. It's hard not to when you're essentially sitting in another man's lap. But we were finally on our way. Or so I thought. A couple hours outside town we turned onto a dirt road that would belong in a Texas Chainsaw Massacre movie. Convinced of my looming disembowelment, I toyed with the idea of eating all of Sergei's tomatoes in a last defiant act. But all was for not as we pulled into Sergei's house to pick up the last few items. But as we prepared to leave, again, a rather chilling, disheartening sound came out of what was supposed to be the motor. We weren't going anywhere. Sergei and the other's toiled away for hours, disassembling, reassembling, banging, grunting and swearing, all in an attempt to solve the problem until they finally gave up. He apologized for the delay, and his wife served some meat flavoured water and stale bread as we were put up for the night. We'd try again in the morning. 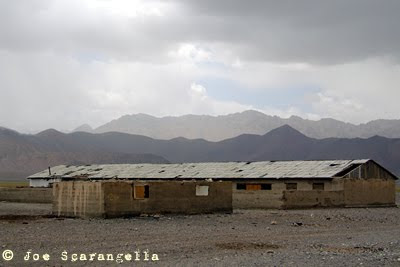 Daybreak brought good news. Sergei had gone for a replacement part and we were off as soon as we downed the tea and biscuits served by his wife. The trip to the Kyrgyz/Tajik border was uneventful. I tried a variety of contortionist positions to try to watch the beautiful scenery fly by our tiny windows. As the border approached, the normally ominous, 7,000+ meter Pik Lenin, had been rudely obscured by the clouds of an impending storm. Border formalities were shockingly easy. But as the Tajik side of the road crept ever higher and higher, it led us right into the guts of a blizzard. Even the poor mountain goats and yaks in the fields had an expression of “This Sucks!” As we crested over the first alpine pass, the snow subsided, the sky cleared and the beauty of the Pamirs revealed itself. But the show was short-lived as night set in. With no headlights, we were forced to bunk down in the lakeside community of Karakol. 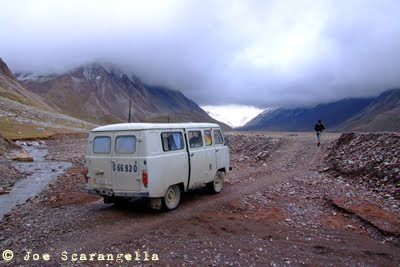 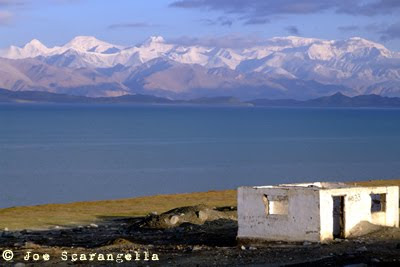 Lake Karakol, Tajikistan
The guesthouse was nice. Good food and blankets thick enough to smother a full grown elephant. Morning came soon. We had arranged to meet at 6 am for what was hopefully the final leg of our journey. However, new mechanical problems had us leaving closer to noon. I didn't mind. Lake Karakol is easily the highlight of the Pamir Highway. Finally we were off, yet again, through some of the most remote and desolate territory on Earth. No towns, no power lines, no traffic, just the guaranteed impending death sentence should the Raf decide to crap out again. Shockingly, the other passengers started to stir. A clear expression of anticipation and relief plastered all over their faces. We had arrived into Murgab. A mere 49 hours after leaving Osh. But even after quickly realizing just how backwater the town was, it didn't matter. My journey had finished. No body parts had frozen off and I wasn't forced to eat any of my fellow passengers. After a much needed stay in a banya, I hoped that I'd be able to find transport for the remaining 4/5 of the Pamir Highway.
Posted by annie at Saturday, October 23, 2010