Kyrgyzstan: Naryn, Tashrabat, and Koshoy Korgon by Jane
To see the full set of photographs accompanying this post, CLICK HERE.

In March 2008 I was working at The London School in Bishkek, Kyrgyzstan. The Islamic holiday of Nooruz fell on a Friday that year, giving me and seven of my coworkers a three-day weekend. We decided to make use of our mini-vacation to travel to the city of Naryn, located a six hour drive to the south-east of Bishkek. From there, our plan was to visit Tash Rabat, a stone fortress/caravanserai dating from either the 13th or 15th century (depending on the source), which was once a prominent stop on the silk road, and which is, as far as I can tell, the only remaining silk road era structure in Kyrgyzstan. 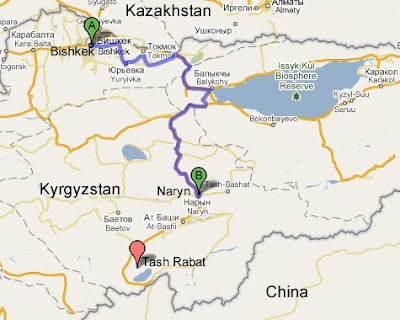 We had hoped to make it to Naryn in time to participate in some Nooruz related festivities, although when we rolled into town late in the afternoon, little to nothing was going on, and people were few and far between. Not the least undaunted, we wandered the empty streets, explored the banks of the Naryn River, and hiked high into the mountains above the city. We weren’t planning to embark on our main adventure – the quest for Tash Rabat – until the following morning. 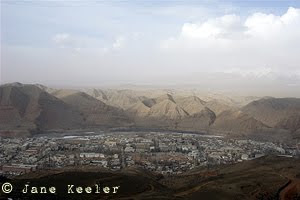 The city of Naryn is a long, thin city,
hemmed into the Naryn River valley.


Public transportation in Kyrgyzstan ranges from iffy and unreliable to nonexistent, depending, and traveling anywhere remotely off the beaten path required arranging for a private car. This, of course, is much cheaper if one has traveling companions with whom one can share the cost, and as I had seven such companions, acquiring vehicles to take us to Tash Rabat was neither difficult, nor expensive. (Anyone seeking to tread in our rather bizarre footsteps should contact CBT Kyrgyzstan, as they are wonderful – especially considering that not many car-owning individuals wish to risk damaging their cars on the less than safe trip to Tash Rabat during the spring.)

Tash Rabat is only about 60km from Naryn; however, due to the quality of the roads, the trip takes about two to two and a half hours. The main road heading from Naryn to the Torugart Pass (leading over the border into China) is traveled daily by numerous semis bringing goods into Kyrgyzstan from its gigantic neighbor. This makes driving interesting, as inevitably both your car and the approaching semi will be driving down the center of the narrow road as rapidly as your respective vehicles can manage! Eventually, you will turn off the main road to China, and head southeast along a small dirt/gravel track. Then you will have to ford a river. The remains of a “modern” bridge can still be seen, although it collapsed several years ago and has yet to be repaired. Depending on the season, the river can be un-crossable in all but the largest, sturdiest of vehicles. Luckily for us, the snows had only just begun to melt, and we were able to ford the river with no problem. 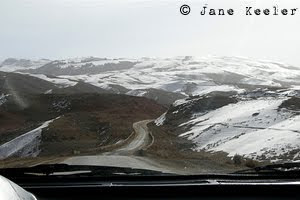 The road towards the Torugart Pass


After fording the river, you will continue up the Tash Rabat valley, following the course of the river. In theory, one should be able to travel by car all the way to the fortress of Tash Rabat itself. However, in Kyrgyzstan, one should realize that just because something is true “in theory” doesn’t mean it will occur in fact. We drove along the river into the Tash Rabat valley. The river was frozen on its surface, yet thawed and flowing underneath. Eventually, we came to a place where the road passed across the surface of the ice for a good fifty meters or so. We were almost across when the ice gave way. Forward momentum ceased and the car simply sunk. There was a moment of silence before our driver said: Uh-oh. 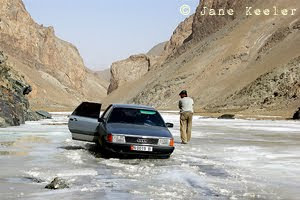 Our driver examines his car, wedged into the ice.What is it with me and strange vehicular journeys across melting ice?
Our driver told us that we were within walking distance of Tash Rabat, and told us to walk on ahead, saying that he’d wait for the second car, and that he and the other driver would be able to get the car un-stuck. So off we walked down the valley. And we walked. And we walked.

As we approached every bend, we were convinced Tash Rabat would be around the next corner. Tash Rabat is located at an elevation of roughly 3500 meters, and the thin air began to make us all quite giddy. At one point my friend Katy and I were even making up a song to the tune of Rock the Casbah, singing rockin’ the Tash Ra, rock the Tash Ra as we tramped an interminable distance further from the car and higher into the mountains. When we finally rounded the final turn and saw the fortress in the distance, we let out quite a cheer. 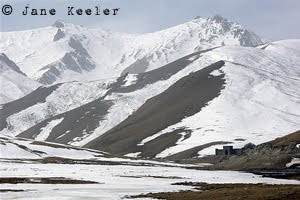 Our first view of Tash Rabat

As we approached Tash Rabat, a woman soon emerged from the homestead located next to the fortress and ambled over to us. It turned out that she and her husband were the caretakers of Tash Rabat. We were invited in for tea, and rested as we waited for the rest of our party to arrive. When we were all assembled, we made our way over to Tash Rabat. The old fortress was interesting, and had a splendid view of the valley. It was filled with many chambers, some of which still bore the remains of the original decorative plasterwork. 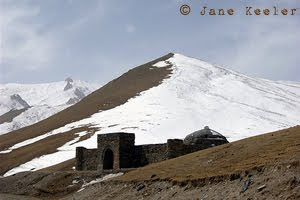 A closer look at Tash Rabat 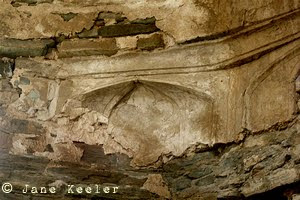 Some of the original plasterwork inside Tash Rabat

After deciding we’d had enough time rockin’ the Tash Ra, the caretaker informed us that her son was willing to drive us back to where we’d left our cars. Since there were eight of us, he had to take us in two shifts. I was part of the first shift. Our driver was young, into absurdly fast driving and crazy loud music – which was both awesome and frightening, given the road quality and all. Nonetheless, we made it back to our cars in record time.

While waiting with our drivers for the second shift to arrive, a man rode up on a horse. He wore desert camouflage, had a shotgun strapped to his back and wore shotgun shells around his waist. We called him the Kyrgyz version of Walker, Texas Ranger. He and one of the drivers began testing the ice in different places (by jumping up and down and stomping) to see if they thought a car could pass over anywhere safely. Apparently, our fast moving, loud-music-playing driver wanted to get across. While they were busy stomping on the ice, Walker Kyrgyz Ranger’s horse simply wandered off. I told him his horse was leaving, and he replied that it was okay; they lived nearby and it was simply going home. He began talking to me... and then offered me five yaks to become his second wife! I wasn’t too clear on whether he’d be shipping the five yaks to my father (which would actually be quite an endeavor) or if he’d simply be assigning me five of his yaks to take care of. Either way, I declined. But now we know I’m worth five yaks. I later learned that the going “bride price” in that area is more like 200 yaks, which was thoroughly disheartening. 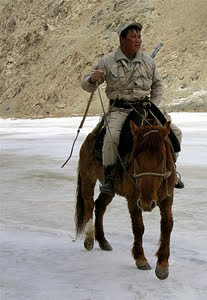 
After both car loads of people had been reunited, we began our trip back to Naryn. However, it wasn’t a straight trip. We stopped along the way at the ruined citadel of Koshoy Korgon, located near the village of Kara-Suu. Not much is known about this fortress (at least according to my guidebooks and the all-knowing interwebz, anyway) but it dates from roughly the 10th century, and was probably Karakhanid. All that remains of this once grand citadel are crumbling earth walls, which are both desolate and majestic. 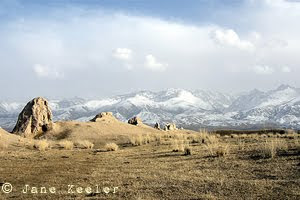 All that remains of Koshoy Korgon
Posted by annie at Wednesday, October 27, 2010