Abkhazia: Conflict in the Caucasus

by Joe
To see the complete set of photographs, CLICK HERE.

Impossible is an ugly word. Some sort of diabolical locution whose sole purpose is to discourage great men from accomplishing great things. I am certainly not delusional enough to call myself “great” and the greatest thing I've done was put the word “quiz” on a triple word score during an internet game of Scrabble. But that doesn't diminish the vile connotations of the word “impossible”. I heard this word a lot while researching my onward travel plans when I was in Georgia. The plan was to visit the break-away republic of Abkhazia. 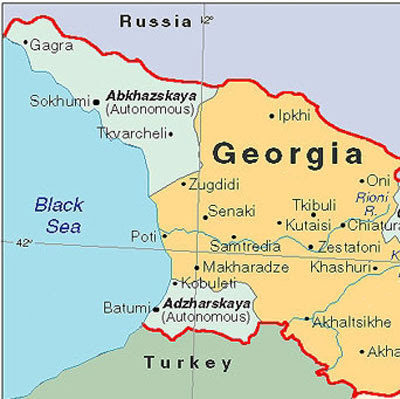 The early '90s were a particularly tough time for cartographers. Stuck in their windowless basement offices (I'm guessing at the windowless bit) they were forced to change and re-change their world maps as Eastern Europe and the former Soviet Union shattered into a million different pieces. Perhaps they went on strike or perhaps they ran out of ink, but whatever the reason a few of these newly independent republics went unrecognized by the world at large. Transnistria, Nagorno-Karabagh and South Ossetia were but a handful of these states that didn't make the cut for UN acknowledgement. Located in the north-west corner of Georgia, Abkhazia was another of these places whose cries for independence were overlooked. That is, by everyone else but Georgia. Georgia launched an offensive in 1992-1993 to squelch the movement. With heavy backing from Russia, Georgia lost. This led to a mass exodus and ethnic cleansing of Georgian nationals in the region, a period in history that is still a sensitive subject for Georgians today. In 2008, during the summer Olympics, aggressions in the area flared yet again. The short-lived South Ossetia war ended with official recognition of Abkhazia as an independent state (by Russia, Nicaragua, Venezuela and Nauru only).

But here's the Catch-22 for a visit to the region. Like most countries in the area, you need a visa to visit Abkhazia. But without external diplomatic representation (certainly not in Georgia), the only place to get a visa is IN Abkhazia. But you can't get into Abkhazia without a visa, but to get the visa..... And thus continues the merry-go-round of international relations. Things seem always in motion, but never get anywhere. The whole exciting paperwork procedure (written with sarcastic overtones) can be found at
Joe's Trippin'. But the general gist is you contact the Ministry of Foreign affairs in the capital Sukhumi, and they eventually send authorization to cross into Abkhazian territory. Or at least that's the theory.

I've never really been the kind to sit back and allow some apathetic bureaucrat decide my future. After repeated phone calls and e-mails, I essentially told the Abkhazian consul that I would be at the border on a certain date, and that clearance should be arranged for me. It wasn't. I got to the Georgian border, and the guards, completely perplexed by a foreigner trying to cross, felt compelled to give me a short history lesson. “You know there's a war, right?” they asked assuming my ignorance. “Yeah, do you have a gun for me?” I replied to much giggling and merriment. They let me through with little hassle. More out of morbid curiosity than in an attempt to promote tourism. The walk across no-man's land was filled with every, very heavily armed, guard checking my paperwork and asking, “You know there's a war, right?” I eventually ran out of witty retorts as my Russian is mediocre at best.

Once at the Abkhazian border control, turns out my permission to enter wasn't there. They were polite and courteous as they told me to get the hell out and go back to Georgia. I wasn't amused by the sarcastic questions of, “So how was Abkhazia?” as I slinked back the same way I had come only moments earlier. But, I had a trick up my sleeve. I had the consul's personal mobile number. After numerous attempts to get hold of him, he eventually worked out that everything was the border's fault, not his. He was infallible and the border guys were the idiots. Whatever! At least I had confirmation. Skipping back across the de-militarized zone (literally), I was immediately allowed to officially cross into Abkhazia. 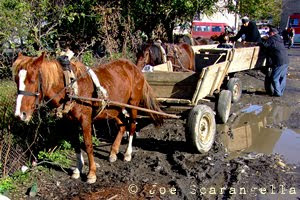 From the border, mini-buses wait to bring “crossers” to the one-horse town of Gali. Well, truth be told, I think I counted 8 horses and 9 chickens. There are no paved roads. No money changers. Just a bunch of people looking downtrodden. After a quick visit and cup of tea with the local police, I was given permission to hop on the bus for Sukhumi, the “country's” capital. The county-side is pretty. Abkhazia is the place where the Caucasus mountains come to melt away into the Black Sea. But the state of development, of lack there of, is pretty much what you might expect of a state-less region which has been at war for the better part of 2 decades. But like all troubled regions, locals put up with it the best they can. 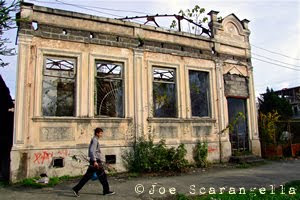 Sukhumi was a place that happy little Soviets would come to frolic away in the '60s and '70s. The seaside town once had a thriving port and a booming tourist industry. But nowadays, the boats lie rusting and tourists are few and far between. Sure Russians still come, but that's about it. The buildings haven't been remodelled since the heydays some 40 years ago. But to add to the desolation and depression, the vast majority of buildings, once the pearl of the Black Sea, sport a unique architectural style I like to call “war-torn.” Bullet holes are everywhere. Countless building are mere shells, having been burnt down in conflict. There's no money or motivation to fix them up. This has become the new Sukhumi. Nowhere exemplifies this more than the old parliament building. A once mighty structure in all it's Soviet grandeur has been reduced to a wild greenhouse and make-shift refuse dump. And locals seem willing to accept it.

There is hope. Local attractions like Novy Afon Monastery and cave system has received foreign funding and is in the midst of a sprucing up. When I visited, the whole visa procedure was in its infancy, but with a little streamlining, it is becoming easier for foreign tourists to visit. The infrastructure is there. There are a number of hotels for the old days. There are several restaurants. They just need people to fill them. 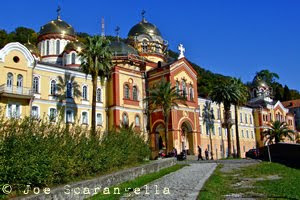 Abkhazia is not dangerous. And while I wouldn't use descriptors like “luxurious” there are options for easy travel to the region. Besides, why would anyone turn down the option of having a one-time vacation hotspot with mountains and seaside and monasteries and caves all to yourself? To see the complete set of photographs, CLICK HERE.
Posted by annie at Sunday, October 31, 2010