A visit to the Khrapovitsky Estate, Muromtsevo, Russia in 2006 by Jane
To see the complete set of photographs accompanying this post, please CLICK HERE.

(During the 2005-2006 school year, I taught at the American Home in Vladimir, Russia, which was the starting point for this adventure.)

“Do you want to shoot castle?”
Working overseas often leads to sentences like this, which make little sense at first, and I stared at my student in confusion.
“Maxim and I want to take you to shoot castle. With your camera.”
Ahh. That kind of shooting. In Russia one never knows. I knew nothing about this alleged castle, but I readily accepted.

Soon I was in a car with my two students - both named Maxim - and our adventure began. We drove about an hour outside of Vladimir to the small village of Muromtsevo, in order to explore the abandoned estate of Count Khrapovitsky. Khrapovitsky was of the Russian nobility, and he in the 1880s he built a gargantuan mansion in the Russian countryside, as Russian nobility tended to do… However, he based his architectural designs on medieval German castles, making this estate quite an oddity in Russia. Local legend has it that he was inspired by the castle of a friend in Germany… except that he based his stable on his friend’s castle and modeled his home after something much more grand.

After the Soviet revolution, the Khrapovitsky family fled to France, and the estate was turned into a forestry college. During WWII it served as a hospital. After the war, it was ravaged by fire, and left to disintegrate.

The Maxims and I arrived and found the door barred shut… but that didn't stop them from, shall we say, un-barring the door. We explored several floors, climbing the remains of rickety stair-cases and clambering around on broken rafters and boards placed over gaping holes in the floor, or even in place of where the upper level floors used to be. 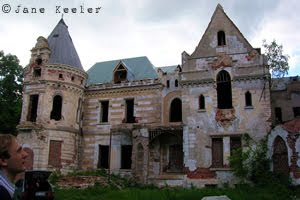 The older wing of the Khrapovitsky residence 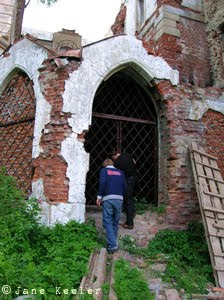 The Maxims working on entering... 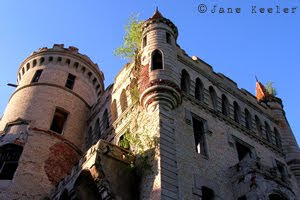 The newer wing of the Khrapovitsky residence 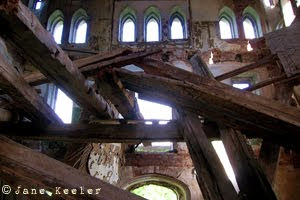 The interior of the newer wing

After we thoroughly explored the castle (and, in the grandest of Russian traditions, consumed a copious amount of wine), we set off to explore the rest of the estate, including the Church of the Holy Martyr Tsarina Alexandra which was commissioned by Khrapovitsky, as well as the remains of his ridiculously ornate stable. 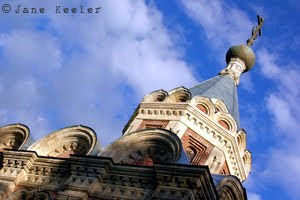 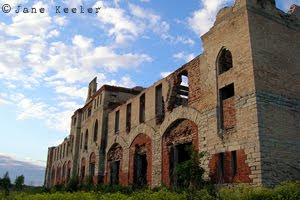 The grounds of the estate were once intricately landscaped, although now they are completely overgrown. In front of the castle, there used to be two artificial pools, connected by fountains which cascaded into a natural pond. The natural pond is all that's left, although you can still make out the walls of the former artificial ponds in the brush in front of the castle. Next to the natural pond was a pavilion for musicians; all that remains of it now are a few arches. 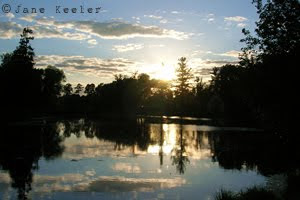 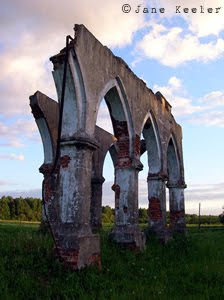 Remains of the orchestra pavilion
My visit to the remains of the Khrapovitsky Estate is one of my most memorable experiences of Russia, undoubtedly due to the fact that one does not expect to come across a crumbling medieval German fortress in the woods near a tiny, rural Russian village!

Unfortunately, it seems that this wonderful memory of mine is not one which is destined to be repeated. A construction/development firm, Colorado Group - one of the companies involved in the refurbishing of Castle Mayendorf, the official residence of the President of Russia - currently owns the properties, and has plans to turn it into a high end hotel, complete with helipad, no less. Gone are the days when a group of friends could spend the afternoon exploring the estate, bottles of wine in hand. Unless, of course, those friends are among the Russian elite... 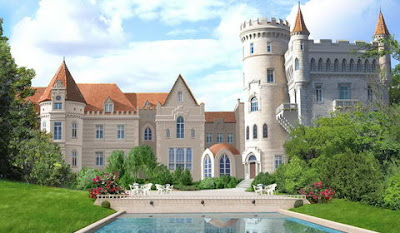 The above picture came from the Colorado Group's website, and it is how they plan for the estate to look once they develop it. You can read more about their plans here and here.
To see my complete set of photographs from my 2006 visit to the Khrapovitsky Estate, please CLICK HERE.
Posted by annie at Wednesday, December 08, 2010